Madison, WI – Yesterday, Representatives Jarchow, Felzkowski, Quinn and Senator Tiffany circulated for co-sponsorship, LRB 3737/1 which would make it illegal for law enforcement to enforce state or federal law relating to management of wolves in Wisconsin. It also does not allow the Department of Natural Resources to expend any funds relating to wolf management other than paying claims under the endangered resources program for damage caused by wolves.

The agencies work in partnership, not just for wolves, but for all of our wildlife in the state.

“This bill shows what we’ve known all along, and why we support continued protection for wolves under the Endangered Species Act – that Wisconsin policymakers aren’t up to task of responsibly managing wolves in our state.”

says Melissa Smith, the Great Lakes representative for the Endangered Species Coalition. “Wolves are part of Wisconsin’s natural wildlife heritage, and Wisconsinites don’t want to see them managed as pests or eradicated.” They also claim that “wolves have taken over northern Wisconsin and that they are depredating our deer population, killing livestock and attacking family pets.”

Despite the record wolf population the depredations are significantly down (-36%, only 50 confirmed losses) and the deer population is massively increased due to mild winters. This bill is an affront to the majority of Wisconsin citizens who support this species, the federal supremacy clause, the federal courts, the public trust and the Endangered Species Act. If this bill becomes law, poaching of the gray wolf will be legal and could very well lead to a second eradication.

These extremist legislators behind this bill massively underestimate the blowback from citizens (most who favor more wolves on the landscape by the DNR’s own social survey – see below) that this bill will generate and it will open the door for other federal laws to be “invalidated” by arrogant extremists. It also opens the door to challenge this bill under the public trust doctrine and 14th Amendment. 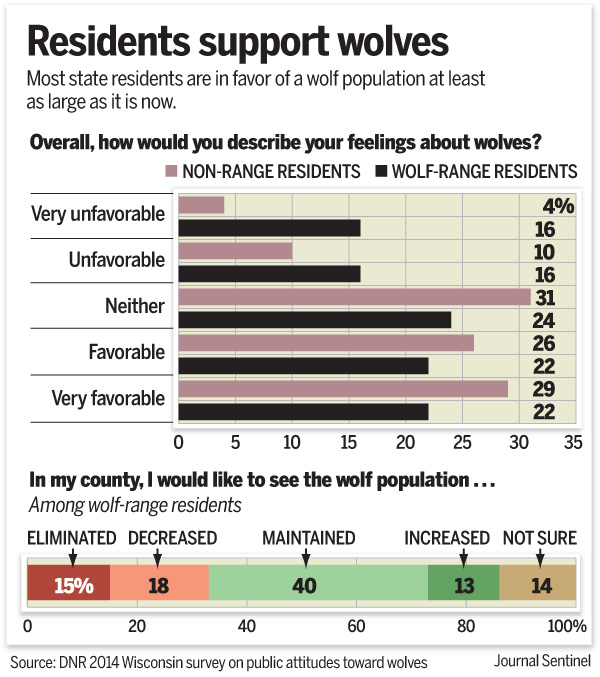 Nancy Warren of National Wolfwatcher Coalition agrees, “Our wildlife management professionals have a responsibility to manage wolves and other wildlife in the public trust, and this ill-conceived bill ties their hands.”

“They’re trying to make the USFWS solely manage gray wolf conservation. It strikes me as these legislators hoping that if they stop enforcing the law and then FWS has to, that FWS will just throw its arms up in exasperation and stop caring. All the while the state acts with impunity to use bad science, enforce no anti-poaching laws, mismanage public trust assets, and lie, exaggerate, and distort, this bill being a perfect example” said Vivian Morrison of Friends of the Wisconsin Wolf and Wildlife.

Advocacy groups will be sending a letter to State Legislators asking them to reject this absurd proposal and continue Wisconsin’s conservation legacy using science, law and democracy to protect our natural resources for future generations.