Under current law, while a person is using a dog to hunt bear or wolf, the person is required to keep on his or her person, tags indicating that the person has been issued a license for the dog and the dog has been vaccinated against rabies. This bill eliminates these requirements.

The bill was dropped on December 5, and was added to public hearing for December 6 late in the day and with very little notice so they could proceed without science or public input. They did the same with the wolf hunt bill. Yet somehow, all of the special interest hunting groups knew about it well in advance. Citizens should be outraged by the absence of a true public hearing. Once again, special interest over democracy.

“This is the craziest thing I’ve ever heard. Bear hounds — I can’t even entertain the idea of hunting wolves with dogs — are left to run out of sight for four hours or more for themselves, no way to control where they go or plan on going, plus at times they will even chase farmers livestock or pets. Bird hunters have control of their dogs, whereas hound hunters have no idea where they will go, they just sit in their trucks and watch them on GPS screens. What would possibly be so hard as to carry a .05 ounce tag in the vehicle?” said Susan Patrie, a park ranger and owner of two German Shorthair pointers, a duck hunting Labrador.

This bill is outrageous and unfair, not to mention a public safety risk. Hunting with hounds is dangerous for dogs and wildlife, and certainly conflict is common, including serious injury to people, wildlife and the dogs. 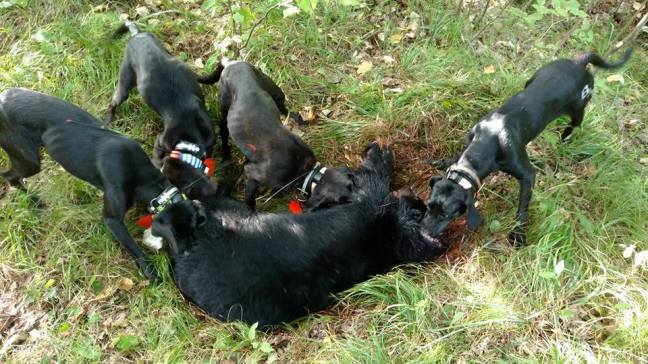 The hound hunters already have lawlessness, and no requirement or license to run hounds on any animal for training, outfitting and hunting. It sadly still boils down to cost involved. For dogs worth $2500 in depredation payments if killed by wolves, you’d like to think that legislators would encourage responsible dog ownership, not remove requirements.

Melissa Smith, director of Friends of the Wisconsin Wolf & Wildlife stated, “the biggest point in this is that this risk group should absolutely be required to show proof of vaccine status and licensing at all times. A lot of these guys are from out of state and are currently engaged in dubious practices, like absence of health certificates required by our state veterinarian to cross state lines.

Hound hunters are known to trespass, kill other people’s pets and engage in state-sanctioned dog and animal fighting. If these are family pets and cherished hunting partners, why wouldn’t you want to license your dogs? The only logical motivation I can figure is that they don’t vaccinate for rabies because they do their own vet work when a hound is torn apart by a bear. And they don’t want to pay for a license, usually required by municipality or by the USDA. You have to provide proof of a rabies vaccine to get a license, then if hunters get in trouble with dogs running at large and trespassing, this bill would prevent them from being fined for not having their dogs vaccinated or licensed.”

The bottom line is that this bill tells us one thing: Hounders are not getting their dogs vaccinated and that should terrify anyone using public lands.”

“I was startled to hear of Wisconsin Assembly bill 711” said Chris Albert, veterinary consultant for National Wolfwatcher Coalition. “Hunting dogs are by definition, more likely to come in contact with wildlife that might be rabid. It seems a particularly reckless idea to exempt them from proof of rabies vaccinations. We all know that without requirement of proof, a certain segment of the hunters won’t bother to vaccinate their dogs at all. There are countries in this world that have over 100,000 human deaths from rabies. We have thus far been fortunate in this country not to have this problem, largely because of the universally required vaccination of dogs for the disease. Rabies is not as rare as you would think. I was exposed while pregnant. This bad bill needs to be defeated before we create an undesirable situation.”

Both organizations are getting letters from public health officials, other dog hunters and veterinarians prepared to be sent to the legislature. They encourage all dog owners, veterinarians and concerned citizens to contact their State Representatives as soon as possible.