As soon as the the grey wolf was federally delisted from Endangered Species Act protections in 2012, Wisconsin officials immediately began to mandate annual hunting and trapping seasons. In 2012, 117 wolves were killed; in 2013, 257; and in 2014, 154. Due to an injunction which prevented the use of dogs, the hunts in 2012 and 2013 did not allow wolf hunting with dogs. However for the hunt in 2014, that injunction was removed which allowed hounders to unleash their dogs on wolves for the first time in state history.

In 2018 a group called Hunter Nation, a lobbying and law firm based out of Kansas, part of “Americans for Prosperity” (a Koch-backed conservative think tank) was created. Their CEO, Luke Hilgemann has a long political history in Wisconsin including working for Scott Suder in the Wisconsin Assembly, helping draft our wolf hunt bill, and working as a Republican strategist for both Fitzgerald, Vos and Tom Tiffany. He has helped with gerrymandering, voter suppression in our state and is a Donald Trump supporter.

Hunter Nation then met a group of GOP lawmakers led by Senator Rob Stafsholt (who is a bear hounder himself and has taken wolf depreciation payments) and Treig Pronschinske in a private legislative hearing. On January 15th, 2021 they sent the DNR board a letter demanding the department launch a wolf hunt right away. The public was not allowed to attend the meeting and neither was the Wisconsin Department of Natural Resources (WDNR).

The Natural Resources Board (NRB) narrowly rejected this letter to direct the DNR to immediately resume a wolf hunt in Wisconsin. The board voted 4-3 against setting a quota and resuming the wolf hunt in February. Of the 1400 comments submitted to the NRB, 93.1% were against having this rushed hunt and 73.4% rejected hunting wolves at all. Tribes, conservation groups, concerned residents and outdoor enthusiasts came out in droves, urging the state not to rush a hunt following the rule by the former administration that went into effect this month.

Lawmakers and hunters argued state law requires a wolf hunt when the animal isn’t under federal protection, saying wolf management has been put off for too long.

Board members debated the law’s requirement to hold a hunt and whether state wildlife biologists have sufficient science to set a quota to harvest wolves this winter. They also discussed whether the agency should update its wolf management plan and rules prior to a hunt, as well as the state’s legal obligations to tribes in moving forward with a season.

On February 2nd, a lawsuit was filed with a conservative judge in Jefferson County Circuit Court by the conservative Wisconsin Institute for Law and Liberty (WILL) saying the law is unambiguous. “The Wisconsin DNR does not have the discretion to determine whether to follow state law when it comes to scheduling a grey wolf hunt,” said the group’s deputy counsel, Anthony LoCoco. “WILL intends to hold Wisconsin’s administrative agencies accountable until this pattern of ignoring state law ends.” They won this lawsuit on February 12th.

The DNR immediately appealed with Amicus briefs from the Sierra Club, but unfortunately, the appeal was lost because, perhaps intentionally, the judge did not officially close the first case. The DNR then met over the weekend to determine a quota to propose to the NRB in a meeting which was never open to public comment. 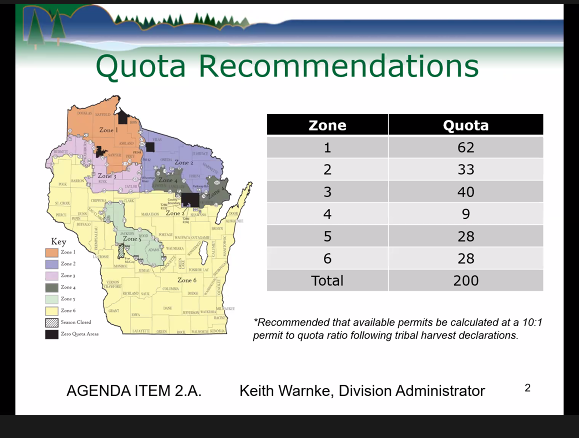 The NRB approved the wolf quota of 200 on non-reservation land split among the six zones with 20 times that number of permits issued. The motion passed with all board members voting in favor. The permit application period opened on February 16 at 12:01 AM and the season would run from February 22nd through February 28th. No zones would close before February 28th unless the harvest quota in that zone had been met.

How many people applied for a tag?  25,872 Wisconsin residents applied for a harvest permit and 1,279 non-residents applied for a total of 27,151 applicants. This means 99.9955% of Wisconsinites did not apply for a license to kill wolves. DNR officials sold 1,547 permits this season, which came out to about 13 hunters/trappers per wolf under the quota’s target number. This equated to twice as many permits as normal, and marked the highest ratio of any season so far. The permitted means of hunting wolves included night hunting, hunting with dogs, snares, traps, guns, night vision, running them down with snowmobiles….you name it, they could do it. And it was massive carnage of wolves versus dogs. In fact, about 90% of our wolves were taken with the use of hounds and about 6% by traps. The others, we simply don’t know.

So in less than 72 hours, the state allowed 216 wolves to be legally killed statewide, day and night by hunters using hounds, snow-mobiles, snares and traps outside of Ojibwe tribal reservations. After the tribes reserved 81 tags (to spare lives instead of kill, as they view officially as companion or brother) yet the state still overshot its quota by 81.5%.

We do not know much about the impact of this hunt on wolves because the season timing, ratio of tags issues and permissible methods were so different from previous years. And unfortunately, much of the population monitoring data for this year was collected before the hunt, so will will not know how many packs may have been eliminated or dissolved from disruption.

This was was the first-ever wolf hunting season held during this time of year, as the three previous wolf hunts had ended before January, which is yet another reason this hunt was so unprecedented. The month of February is part of their breeding season, so undoubtably some wolves were pregnant, but we will only be able to estimate how many and most pregnancies would have been not very far along. We would expect that some packs will not produce pups this year, while other packs may dissolve, especially if they lost more than one individual. While don’t know how many wolves were pregnant or had already given birth to young, we do know that 46% of those killed were female.

And with that, we will leave you with these final statistics which just came in from Dr. Adrian Treves:

Scenarios for reproduction are uncertain, but if we calculate mortality without young of the year in 2021 as a baseline, and assuming cumulative incidence of all causes of mortality during a liberalized killing period (non-winter) from Santiago-Ávila et al. 20202 and estimated for the period 15 April – 1 November 2021, we expect 484-536 wolves to still be alive or perhaps slightly more if the packs protected by tribes did not die outside those sanctuaries.

Our scientists estimate 88-97 additional wolves were poached during the 72-hour wolf hunt and that all of the drain on the wolf population since April 2020 means we will have 492-567 wolves by 14 April 2021, which means 45-52% lower than the last census.

After reviewing these numbers, based on the best available science, this hunt was detrimental to our wolf population and they cannot withstand another hunt this fall.

6 thoughts on “What Just Happened to Wisconsin’s Grey Wolves?”